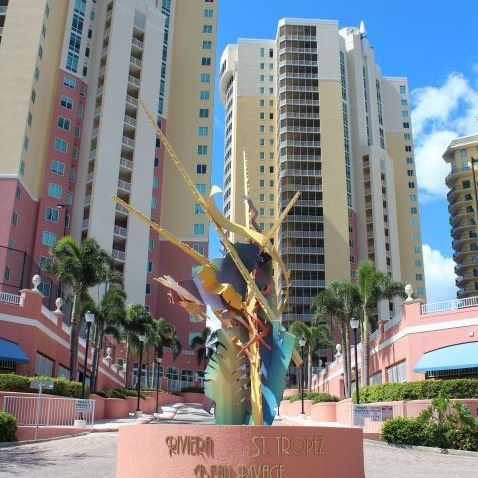 Naiad is a colorful freestanding sculpture that stretches three stories into the Florida sky. Designed by internationally-renowned metal sculptor Albert Paley, it is formed and fabricated from polychromed steel. The metal sculpture stands on a circular pedestal set in the center of a bricked turnaround at the front entrance of the Riviera and St. Tropez with a color scheme that complements the yellow-and-white over salmon of the condominiums that tower high above it. In Greek mythology, naiads are a type of nymph associated with fresh water, like that found in springs, streams, brooks, wells, fountains and rivers, like the Caloosahatchee, which is what influenced Albert Paley to choose the name Naiad for this piece.

When the developer (St. Tropez Homes For America Holdings, Inc.) put together its planned unit development for the Riviera – St. Tropez condominium project, it chose to commission and install its own public artwork, making Naiad the first ever public art project funded by a private developer in association with the City’s public art ordinance. When the project was completed in 2010, the developer transferred title to the sculpture to the condominiums’ homeowners association, Riviera-Fort Myers Master Association, Inc. “subject to the rights of the City as set forth in the PUD and Public Art Article of the Land Development Code.”

Over the past four decades, Albert Paley has created monumental site-specific metal assemblages that place him not only in the forefront of contemporary sculpture, but in the vanguard among artists working in the new, genre-defying area that has been called “Archisculpture.” Paley goes beyond creating sculptures that stand as isolated works of art. His sculptures enhance the spaces in which they are placed and, in return, are enhanced by those spaces. He has established himself as an artist who constantly pushes boundaries, questions old categories and redefines himself in his own distinctive idiom, at once visionary and persuasively tangible.

Commissioned by both public institutions and private corporations, Paley has completed more than 60 site-specific works. Some notable examples are the Portal Gates for the Renwick Gallery of the Smithsonian Institution in Washington D.C., a ceremonial archway in Philadelphia, the Portal Gates for the New York State Senate Chambers in Albany, a monumental plaza sculpture for Rochester Institute of Technology, as well as a 65-foot sculpture for the entry court of Bausch and Lomb’s headquarters in Rochester, N.Y.

There are three other examples of Paley’s work in Southwest Florida. His sculpture, Cross Currents, is located in the courtyard between Howard and McTarnaghan Halls on the campus of Florida Gulf Coast University; he made the gates for the gray marble entry to the Patty & Jay Baker Naples Museum of Art; and he also created the ornate handles for the lobby doors for the Philharmonic Center for the Arts at Artis Naples.

Broadly published and an international lecturer, Paley received both his BFA and MFA from the Tyler School of Art in Philadelphia. He received honorary doctorates from the University of Rochester in 1989, the State University of New York at Brockport in 1996, and St. Lawrence University, in Canton, New York in 1997. He also holds an endowed chair at the Rochester Institute of Technology. Paley is the first metal sculptor to receive the coveted Institute Honors awarded by the American Institute of Architects, the AIA’s highest award to a non-architect. 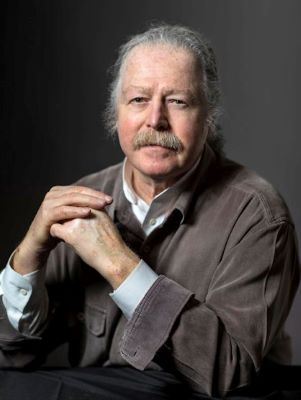