Fort Myers was a Union stronghold during the final year of the Civil War. Two companies of the USCT 2nd were stationed in Fort Myers and detailed with confiscating cattle from ranches to the north that were needed by the Confederacy for beef, leather and other beef byproducts. Their efforts were so successful that they prompted an attack by a contingent of more than 275 troops belonging to the Florida Special Cavalry 1st Battalion, which was popularly known as the Cow Cavalry. The Union soldiers in the fort, including elements of the USCT 2nd Regiment, repelled the attack and prevented the fort from being burned to the ground.

The USCT 2nd Regiment Memorial features a larger-than-life “bronze” of a fictional sergeant in either Company D or I. He is standing before a gate within a wall. The gate symbolizes freedom from slavery. The soldier not only represents the 168 men belonging to Companies D and I, but memorializes the 179,000 African American soldiers and 19,000 who served on the side of the Union during the Civil War.

The soldier is framed by two granite plaques. The one on the left is the dedication. It contains a four sentence summary of the battle, which was waged on February 20, 1865. The inscription also notes that during their tour in Southwest Florida, USCT troops freed and enlisted more than 1,000 slaves who had been toiling in the fields and ranches in this part of the South.

The plaque on the right contains a poem entitled “In Freedom Cover Me” which sculptor Don “D.J.” Wilkins wrote and ascribed to the soldier, “who’s representational and did not really exist.”

The soldier in the memorial goes by the nickname “Clayton.” Wilkins named him that because “it took a ton of clay to sculpt the statue.” Dedicated in 2000, some 135 years after the Battle of Fort Myers, Clayton is a reminder of the rich historical heritage that we enjoy here in Lee County and the City of Fort Myers. 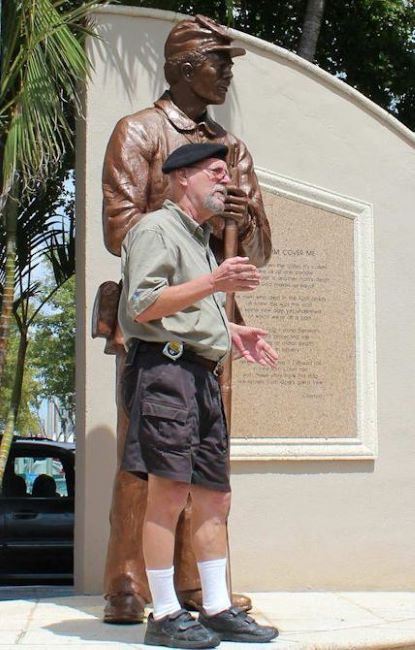