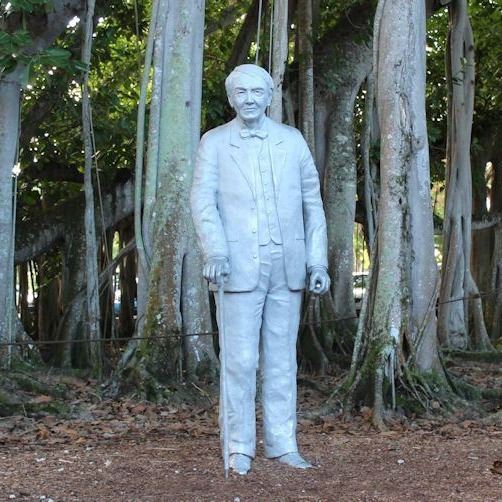 The entrance to the Edison Ford Winter Estates is dominated by an acre-wide India banyan tree that was planted in 1925. Back then, it was a mere four feet in height and two inches in diameter. Today it is the largest banyan tree in the continental United States, covering more than an acre and supported by more than 350 roots. And standing right in front of it, as though greeting visitors, is a standing figure of Thomas Edison, undoubtedly the most photographed sculpture in all of Fort Myers.

Made by local sculptor D.J. Wilkins from cold cast aluminum, the sculpture is anchored to a platform that is covered by mulch in order to give the appearance that a waiting Edison is supported merely by the trademark cane extending from his right hand. Wilkins included a silver ball in the inventor’s left hand, although he could have easily opted for a sprig of goldenrod given that the bulk of the research Edison conducted in the laboratory on his winter estate involved testing over 17,000 botanicals in an effort to discover a local source of latex from which to make rubber.

But for Wilkins, the silver ball represents a deeper insight into the mind of the great inventor. Thomas Edison often deflected his genius, claiming that creativity was “one percent inspiration and ninety-nine percent perspiration.” But he certainly paid closer attention than the rest of us do to the ideas that came to him. As legend goes, Edison would sit in a chair when he got sleepy, holding a ball bearing in his left hand. Soon, he would enter the “hypnagogic state,” a stage between wakefulness and sleep where many people claim to have visual and auditory hallucinations.

“When Edison eventually moved into deep sleep, his hand would relax and the ball bearing would drop into a metal bucket he kept by his chair,” Wilkins relates. “He’d wake up and jot down the ideas that had popped into his head while he was dreaming. If the story’s true,” Wilkins thoughtfully adds, “you can add biofeedback to the list of things Edison invented.”

While historians and curators at the Edison & Ford Winter Estates emphatically disavow Wilkins’ silver ball story as unsubstantiated urban legend, the sculpture pays homage to the discipline that Edison displayed in his constant effort to harness the power of his continually-evolving intellect and give voice to his creative genius.

Donated by Estates’ patron Darilyn Alderman, it was dedicated on February 11, 2005, the 158th anniversary of Edison’s birth.