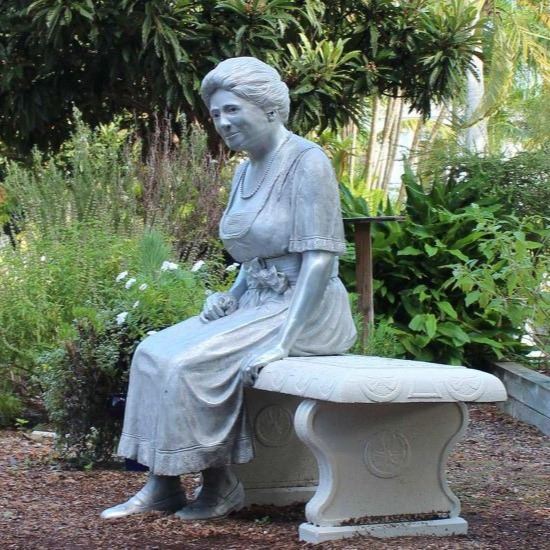 Just past the sculpture of Thomas Edison and to the left of the ticket office is a seated, heroic-size Mina Edison crafted in cold cast aluminum. She is seated on a concrete bench with room enough for visitors to sit and have their picture taken with the “home executive” of the Edison Estate. And appropriately, the sculpture sits in the Edison Heritage Garden, a place in which Mina would have felt right at home.

While husband Tom was consumed with collecting and testing scores of plants for their medicinal and scientific value, Mina adored the beauty and tranquility of formal gardens. Over the years, she had a number of them installed throughout the grounds, including a moonlight garden of white and blue blooms, a lily pond garden of iris, water lilies and papyrus, and a rose garden as well. All became perfect backdrops for the socialite’s many tea parties and luncheons, but the Edison Heritage Garden held special significance. It was there that Mina grew vegetables and herbs in raised garden beds and containers, watering them with collected rain water. And nearby are a variety of fruit trees the Edisons cultivated, including banana, lemon, avocado, star fruit and calamondin. Mangoes are especially plentiful and run the length of the front entrance.

But Mina did not merely enjoy the estate’s gardens. She was active in numerous garden clubs and related civic groups including the Chautauqua Association (where she served as president of the Bird and Tree Club), the National Audubon Society, the John Burroughs Association, the Daughters of the American Revolution (where she served for a year as its national chaplain) and the School Garden Association of America.

While scores of visitors take advantage of the space left on the bench for photo ops with Mina, the spot was intended by Wilkins for Thomas Edison. “She’s looking over at him as if to invite him to come over and sit next to her,” Wilkins reveals. “I think that’s why so many people sit next to her. They’re responding unconsciously to that look in her eyes.”

Donated by Orvall McCleary, the Mina Edison sculpture was dedicated on February 11, 2009.